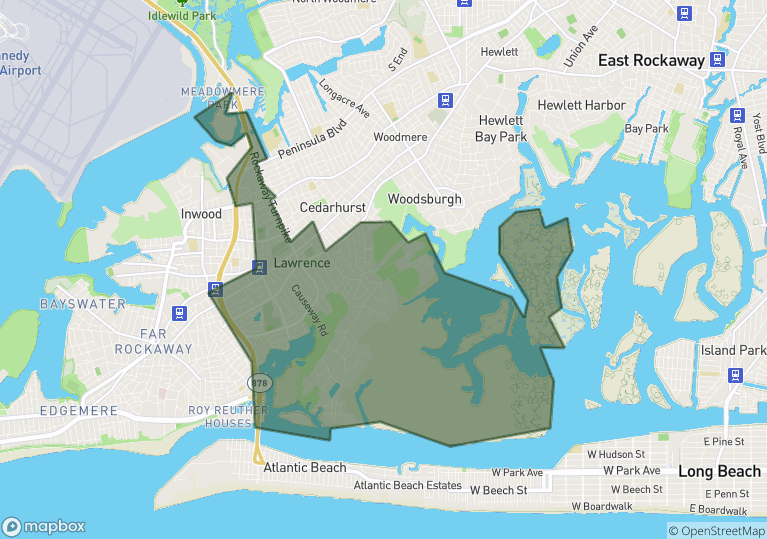 A quick view of the most influential metrics in Lawrence.

A collection of floorplans for Lawrence.

Lawrence, New York is a semi-small coastal community in Nassau County. It is located in the town of Hempstead and shares a border with the Queens neighborhood in New York. Lawrence is a family-friendly community with good public schools, low crime rates and plenty of room to run. It is a solid, stable community with predominantly traditional single family homes and high rates of home-ownership. Being a coastal community it is nautical in nature with waterfront scenery and activities not to mention the nautical history. Lawrence is a rich community both economically and educationally. It is wealthy in comparison to state and national economic standards and nearly 76% of the adults hold four-year degrees or higher, which is more than triple the national average. It is somewhat diverse ethnically and racially. English is the primary language of the community, however, residents speak a variety of other languages include Hebrew, Spanish, and others.

After the arrival of European settlers the area that would one day be Lawrence, was farmland. The community is named after the Lawrence brothers who acquired land in the area and developed it beginning in the 1850s. The brothers developed it as an area to accommodate the wealthy and famous from New York. They built a train station, which still operates today at Lawrence Avenue. Next, they built the Rockaway Hunt Club, roadways, a hotel, drainage and even curbing. Many of the community’s large homes were constructed as summer homes for the wealthy. Lawrence has to continue to grow over the years and now beyond mansions and summer homes it also features smaller homes in more modest developments.

The community spans 4.7 square miles. In 2000 the population was 6,522 and the population density was 1,694.6 people per square mile. In the same year, the median household income was $104,845, the median family income was $129,779 and the per capita income was $51,602. In 2013, the estimated median household income was $131,905 and the estimated per capita income was $56,780. In the same year, the mean housing price on all units was $891,126 and the median gross rent was $1,753. These figures reveal steady growth in terms of population as well as the local economy. It is a white-collar community where approximately 7.5% of the workforce works from home via telecommuting and home-based businesses. Average commute times for those employed outside the village is approximately 37 to 38 minutes. Thankfully, public transportation is available and commuter trains remain the most popular option.

Public education in the community is provided by the Lawrence Union Free School District. The district has approximately five schools and 2,900 students. Local schools include Lawrence Middle School, Lawrence Senior High School, and others. House for sale in Lawrence run the gamut from first-time buyer homes, through historic homes and up to and including mansions. Other real estate options include apartments for rent and lease properties such as townhomes and condominiums. To find the home of your dreams in Lawrence, simply call friendly local real estate agent Edward McNulty at (516) 887-3603 and begin your home search today.

View our selection of available properties in the Lawrence area.

Check out the latest demographic information available for Lawrence.

Learn more about schools near Lawrence complete with ratings and contact information.

The Best in Lawrence

Browse through the top rated businesses in the most popular categories Lawrence has to offer.