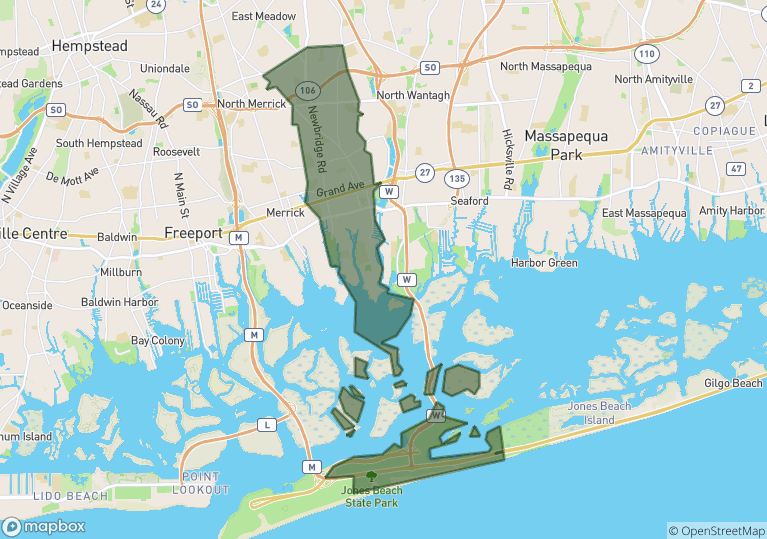 A quick view of the most influential metrics in Bellmore.

A collection of floorplans for Bellmore.

Bellmore is a medium-sized coastal hamlet and CDP in Nassau County, New York. The hamlet has six neighborhoods, is a suburb of New York City and is the 115th largest community in the state. Bellmore is nautical in nature with a rich maritime history, beautiful waterfront scenery and countless waterfront activities. It also has low crime rates, excellent schools and over 47% of adult residents hold four-year degrees or higher. The community is primarily residential and has high rates of home-ownership and an abundance of traditional single family homes. It is a solid stable family friendly community with a warm and welcoming atmosphere. Bellmore has a white-collar workforce, where over 87% of the workforce hold white-collar positions. It is semi-diverse both ethnically and racially and English remains the primary community followed by Spanish and Chinese.

The area that would become Bellmore was settled in the mid-1600s primarily by English settlers. Among the early settlers was Christian Sorto, John Smith, and his son, as well as John and Sarah Bedell and others. Growth was slow and for many years the area remained rural/agricultural. The railroad came through in 1867 and a local station was built and named Bellmore Station. A community soon grew around the station and took on the name Bellmore. By 1920, the thriving community had a population of 3000 residents. Farms remained mixed among the residential areas all the way up into the 1960s. Today, the community is known the gateway to Long Island beaches, parks and more.

Two school districts serve Bellmore, Bellmore Union Free School District and North Bellmore Union Free School District. Local schools include Saw Mill Road School, Park Avenue School, John F. Kennedy High School, Winthrop Avenue Primary Center and many more. Bellmore is home to the Mathematical Olympiads, a prestigious annual math competition for elementary and middle school age students. Major roads in Bellmore include Sunrise Highway, Southern State Parkway, Merrick Roads and others. For those with daily commutes outside Bellmore and the average trip takes about 34 minutes. However, public transportation makes such commutes simpler and commuter trains are the most popular option. Houses for sale in Bellmore come in a variety of sizes and styles to suit the needs of buyers. Other real estate options include apartments, condominiums and more for sale, lease, and rent. To find the home of your dreams in Bellmore, make the call today and talk to the friendly local real estate agent Edward McNulty at (516) 887-3603.

View our selection of available properties in the Bellmore area.

Check out the latest demographic information available for Bellmore.

Learn more about schools near Bellmore complete with ratings and contact information.

The Best in Bellmore

Browse through the top rated businesses in the most popular categories Bellmore has to offer.